I Can Do Whatever I Like: Freedom of Expression Guaranteed 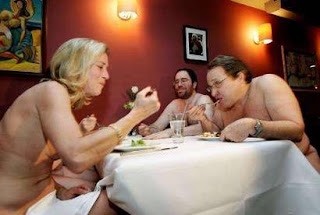 I've decided that all government coercion is wrong.  Government has no right to tell me what to do with my body.  Self-expression is a fundamental right.  And nudity is completely natural.  I have a total right to be naked in public.  Anywhere in public.  It's just your personal hang-up if you are bothered by it.  There's nothing inappropriate about it.  Keep your laws off my junk. 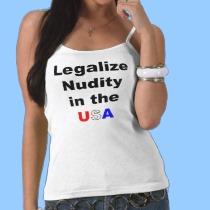 You don't want your kids seeing something like that?  Well, keep them indoors.  My nudity isn't going to cause them problems; your uptight attitude will, though.  Let those kids out in public and I have a right to dance nude in front of them if I want to.  This conspiracy to force me to be clothed in public when that is not my natural state--well, it just won't stand.  In the next 25 years, the Supreme Court will realize that these anti-nudity laws are straight-up discrimination, and worse, they are old traditional morés based on religion.  Keep your religion off my junk.

If you don't want your kids to be exhibitionists or nudists, then don't raise them to be.  It's not like they're going to catch "the naked" from me.  Come to think of it, I have a natural right to touch any part of my body in public. I don't understand this country's fetish with restraining natural urges.  If it bothers you, don't look.  People are prurient these days because they're taught to inhibit themselves. You can be inhibited if you want, but don't make me be that way.

Of course, I don't actually think this way.  But I bet many "left-libertarians" and progressives do.  I bet many teachers and college professors do.  Like that college professor who had a sexual act exhibited in a university classroom for his students and later explained that at the time he couldn't think of a good reason not to do it.  "I did not wish, and I do not wish, to surrender to sex negativity and fear."  Wow, that professor is just a beacon of freedom, isn't he?  Setting minds free with parent-funded and public-funded live pornography.
Posted by Darth Thotz at 11:43 PM