While the rest of us are out working jobs to pay taxes, millions of indoctrinated liberal children sit unemployed in their parent's basement and flood the Internet with liberal propaganda.

The other day I came across this on the Craigslist Joke Forum: 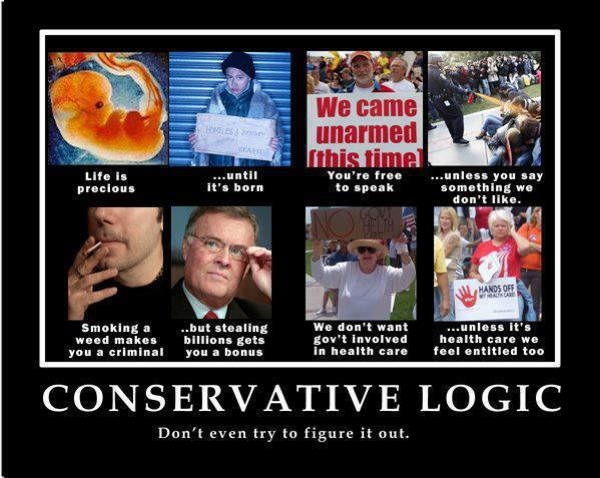 Four different examples of how "Conservative logic is illogical."  Let's go through them starting at the top left.

Conservatives have the temerity to claim that life is precious.  Which, as every liberal knows, isn't true.  Meat is murder but never abortion.  Life ceases to be precious when a woman chooses it not to be.  But let's look at the photo to the right of the fetus.  What is that? Thank goodness for Google Image search. Turns out it's ostensibly a picture of a homeless child. Uh, so conservatives are somehow to blame for the homeless?  Then why did the U.S. Conference of mayors say that "homelessness continues to surge under Obama."  This is fueled largely by Obama's jobless recovery which leaves the 18 - 24 age group at a 13.1% unemployment rate.  But the picture above is not of an 18 - 24 year old, it's of what appears to be a 12-year old boy.  And I gotta call BS on that.  Every city, every county, every state in America has a Department of Family Services.  Any "homeless" child can call 911 and be in foster care that same day.  I did once see a child who claimed to be homeless in a store parking lot.  I was on the phone to the authorities immediately and they were there within minutes.  Turned out she was hustling money for her drug-addict mom (hey, it's woman's right to choose what to do with her child, right?)  That girl was off the streets and being cared for immediately.

Let's move on to top right.  On the left is a picture of a Tea Party rally.  On the right is a photo of the UC Davis pepper spray incident in which a few people at a Occupy Wall Street protest were pepper sprayed by a campus police officer.  First question, how the heck are conservatives to blame for this?  UC Davis, like most universities, is a hotbed of liberalism. That cop was hired by liberals, and served under the authority of a liberal administration. Why didn't they give the order to treat the Occutards nicer? Maybe for the same reason the ultra-liberal City of Los Angeles evicted them from City Hall.

But let's also talk about the notion "...unless you say something we don't like."  Can anyone tell me what the OWS Occutards had to say?  What was their point?  They themselves were certainly never able to state a point when interviewed by the media. It seemed to be nothing more than a bunch of lazy, low intelligence, out-of-work hippie stoners camping out on public property and making a tremendous mess for others to clean up.

In fact, it's the liberals who actively suppress any speech they disagree with. Barack Obama proved this by ordering the IRS to target conservative groups.

In the bottom left we have a fine upstanding Democrat doing what they do best, smoking a joint. Next to this liberal patriot is a picture of Ken Lewis, the former CEO of Bank of America, with the caption "...stealing billions gets you a bonus." First of all, that's an outright lie.  As liberal bastion HuffPo reported Ken Lewis received no salary and no bonus for his last year of employment. But let's talk about those "stolen" billions. Who was it that authorized the bailout of BofA? Why, of course, it was Barack Obama and the (then) Democrat-controlled Senate and House of Representatives. So... how is this in any way possibly a conservative thing?  Seems like those two pictures go together perfectly; the Dems smoked some pot and then handed out tens of billions of taxpayer money. Why not? No skin off their nose. They were squandering other people's money.

Entitlement?  But, that's a liberal claim as in "everyone's entitled to healthcare."  This is the Democrats excuse for having the government destroy healthcare for everyone.  Seriously, can someone please name for me anything the government has taken over and not made much worse?  From education to the environment to charity to... pretty much everything the Federal government does is a disaster.  These are the people who tell the TSA to molest children in wheelchairs while doing nothing to stop the Boston Marathon bombing or Benghazi.  The people who so vigorously oppose American energy independence by blocking the Keystone pipeline so that instead we can continue paying billions per year to OPEC countries who funnel the money to Hamas and Al Qaeda.

But the bottom line is that 54% of Americans oppose Obamacare.  And yet, this is somehow an example of "conservative logic" gone wrong.  With liberal logic, ignoring the will of the people makes more sense.  Because then, when everyone is subjected to the abject misery of government healthcare, the liberals will use similar outright lying graphics to show how Obamacare was just another Conservative Plot and George Bush is to blame.


Posted by TalkaboutPopMayhem at 12:41 AM