Can't We All Just Coexist?

A couple years ago I happened to see this little gem on the back of a Prius:

As you've probably noticed, they're everywhere now. Given the religious symbols, it wasn't too hard to figure out what the hippie was preaching: "All you backwards religious folk need to coexist peacefully."

Wow. What would we do without the insightful wisdom of hippies? It's so clear now! Gee, why didn't we think of this before?

I'll bet these same hippies could solve the problems of poor broke Greece: Get more money! Is your country having a famine? Dude, you should get some food. Drought? Get more water.

Who would have guessed that Captain Obvious is in fact a stoned, smug, know-it-all hippie?

Just about everyone with a brain has already spluttered about the absurdity of Christians and Jews trying to "coexist" with the people vowing to exterminate them so I feel no need to cover any of that ground. But I did happen to notice an ad in the back of a comic book for a "Coexist Liberal Bullshit Decoder Ring." Turned out to be a better investment than green energy. Here's what I found out: 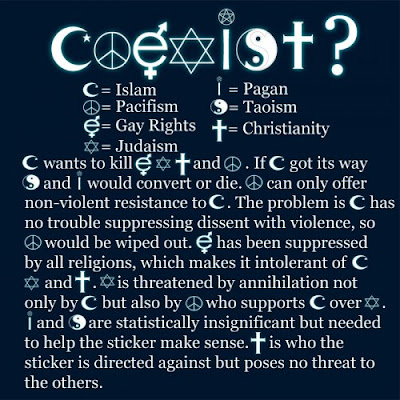 That last line is really what motivates the sticker to begin with. Christianity poses no threat to other religions but it DOES pose a major impediment to liberalism. See, those pesky Christian religious nuts keep saying it's wrong of Democrats to use abortion to genocide blacks.  That it's better for a child to be raised by two married parents. That it's wrong to steal. That teenaged girls are not obligated to be promiscuous.  Or, more generally, Christians believe that there is such a thing as right and wrong. And liberals simply cannot abide by such an opinion.

"Coexist." A bigger lie the liberals have never told for the fact is that the penultimate goal of hippies everywhere is a communist regime. And one thing that all communist regimes have in common is the ruthless suppression of any form of religion. So what they're really saying with that sticker is "um, yeah, if all you religious cranks could stand single file over there so we can kill you all with the same bullet, that'd be great."

Sorry, Lumberg, we are unwilling to oblige. 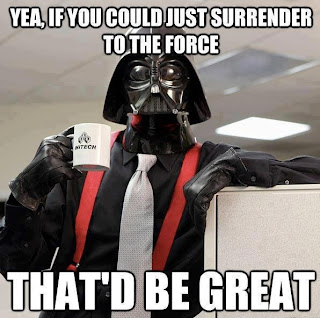 Posted by TalkaboutPopMayhem at 12:40 AM