The DRape Equation and the Alleged Rarity of Rape

The last time I wrote about the Todd Akin controversy, I said I would delve into some other aspects at a later point.  Here we go.

Let's begin by saying that Akin's comments were unfortunate even if he could have better defended his gynecological statements.  Why?  Because rarity isn't a good basis on which to argue.  It distracts from the main issue that Akin tried to articulate as well: that there is a person that simply doesn't deserve to die for someone else's terrible crime.

In defense of the several rape victims whose kneejerk reaction to Todd Akin's comments was that he was saying victims who get pregnant are likely not victims at all (none of the several complainants that I read actually acknowledge that they had an abortion, curiously), there is a habit, in both men and women, to wonder what a woman has done to bring it on herself. (Even in the Peace Corps: “In the weeks that would follow, I received emails from the Peace Corps on how I could have prevented this.”)  And I think that many are projecting negative attitudes they have by attributing them to conservatives -- largely due to the lens through which the Left has many people viewing this political conflict. 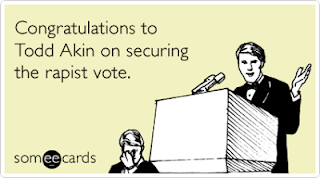 I can't help but revisit the Todd Akin uproar, since that was the peak moment of in the throwing off any truce in the Culture War (so that the election wouldn't be about the economy).  There were some thoughtful left-leaning souls blinking in wonderment as the Left effectively sensationalized it, though they apparently thought that Akin's statement had connotations that were as ugly as the silly notion (not too silly to spread through repetition) that Republicans wanted to legitimize rape -- an insinuation that made it unnecessary for anyone to  discuss Akin's words in context.  Akin specifically addressed this ludicrous insinuation by saying "I want tough justice for predators," as though there were some sorts of rapes he condoned, ones that weren't legitimate rapes but cases where "she's asking for it." 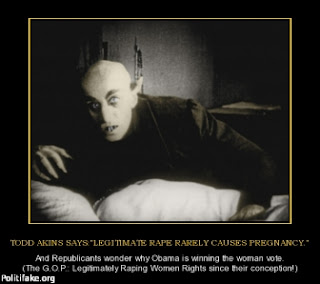 And Akin's response illuminates the Left's bullying tactic:  Unless you are willing to sacrifice the fetus,  you have no sympathy for this woman and what she's been through.  Yet, the traumatic experience that many are re-living would seem to accord with "forcible rape," the very class of experience that is targeted in abortion exemptions by conservative legislators.

At any rate, if you follow the maze of online Akin outrage, you'll find Akin's alleged gynecological ignorance traced to Dr. John C. Willke who is no doubt considered a quack due to his involvement in the pro-life movement.  Many leftist articles actually quote Willke's now famous article, but only the part about "physical trauma," and they imply that this vague assertion is what Willke's argument rests on. 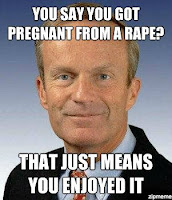 Actually, Willke presents something like the Drake Equation for estimating the numbers of planets in the galaxy that might harbor intelligent life.  His equation starts with an estimation of the numbers of rapes and works from there.  The effect of "physical trauma" raises one of his factors from 15% to 20%.  A pretty modest tweaking.  And while various parts of the equation could be critiqued, it raises some important questions about why the oft-cited 5% number would be (could selection bias be possible), and which of Willke's variables is so greatly underestimated.  And it is even more telling that the commentators do not even attempt to address it.

If Willke's article is the flagship articulation of the "rare" claim, you'd think there would be a more methodical critique of it.  Unless it is simply assumed to be wrong because.  Because it's obviously wrong.  Because it can't be right.

A NY Times article quickly claimed that the rate was somewhere between 1% and 10%.  That really narrows it down, considering how adamantly it's claimed that it's a settled issue.  Elsewhere I've read articles with doctors saying that it's 3%, same as for consensual acts.   Elsewhere, it's 5% proving undeniably that the many evolutionists are right that there are evolutionary advantages to the "rape instinct."  Others still cite a study that showed (selection bias?) 6.4%.  According to some studies, a little trauma is good for reproduction.  That's what the "sound science" is saying. 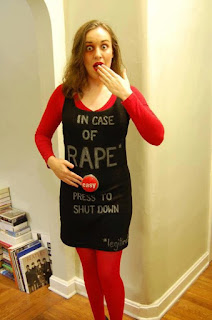 Even if the higher numbers are more accurate though, I wonder at the people that denounce as absurd the idea that physical and emotional trauma would have an effect opposite to that of the emotional-hormonal mechanisms that operate under ideal consensual situations.  It's not just that they are claiming that the evidence doesn't support what some might intuitively think -- the idea for some is preposterous on the face of it!  This idea led this blogger to question why various doctors have said that stress is a significant factor in inhibiting conception.  Among non-consensual acts, aren't forcible rapes the ones that tend to PTSD and other extreme and prolonged manifestations of stress?

It is also worth noting that several commentators who at least write like they've had some level of education make it sound as though Akin claimed that a woman has volitional control over conception/implantation, when it's obvious in the extreme that that's not what he said.  Are they being deliberately obtuse?

The final thought I'd like to leave my readers with is this:  Why would pro-life arguments (especially from those who think abortion is wrong under all situations that don't endanger the mother's life) even address the frequency of these pregnancies unless it had been one of the many sorts of statistics that was used to argue for abortion in court and in the public forum?  Were overestimated stats ever used to sway opinion in the direction of more liberal abortion policies?


"[W]hen we spoke of [mass statistics for "back alley" abortions] it was always 5,000 to 10,000 deaths each year'. I confess that I knew the figures were totally false...But in the `morality' of our revolution, it was a useful figure, widely accepted, so why go out of our way to correct it with honest statistics?" [s]aid Dr. Bernard Nathanson, one of the founders of NARAL and once the director of the busiest abortion clinic in the Western world.*

Even if the abortion advocates had changed public policy and public opinion with made up statistics, it isn't necessarily effective to focus on refuting them now, especially when it is more appropriate (and effective) to call attention to the humanity of a prenatal child.  So what if liberals are basing their emotional foothold on a relatively small subset of actual scenarios?  It obviously (hindsight is 20/20) doesn't help to trivialize the frequency even if it historically has been overestimated for effect.  Instead re-frame the whole thing to emphasize what does matter.

Posted by Contrariwise at 11:13 PM