MLK: Would Dr. King Be Rejected By Democrats?

First of all, Dr. King was a pastor that derived his ideas on civil liberties and just law from Judaeo-Christian tradition.  Which means he was against abortion.

The ultra-lefty Jezebel site does a "fact check" on Fox News by pointing out that Dr. King received an award from Planned Parenthood.  Well, then what gives?  The problem with that is that things change over the years.  Planned Parenthood, in the days before Roe v. Wade, was officially against abortion.   Dr. King, like most Protestants, was not against a responsible use of birth control (what he would've thought of passing  out condoms like Halloween candy is another matter), but was against abortion.


Those advocates of taking life prior to birth do not call it killing or murder; they call it abortion. They further never talk about aborting a baby because that would imply something human. Rather they talk about aborting the fetus. Fetus sounds less than human and therefore can be justified…

Oh wait, that was Jesse Jackson I just quoted (before he sold his soul to the Democratic party)!  Most of the civil rights ministers, er, leaders were pro-life like Dr. King, and the fact that it has been mostly black children eliminated by abortion was not lost on them either.  Unlike Joe Biden and the pre-1980 Jesse Jackson, Dr. King actually let his morals affect his politics. 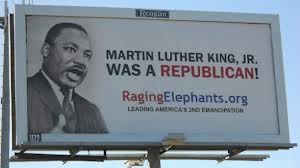 And Dr. King, like many ministers in the black community today, didn't believe homosexuality was healthy choice or the most moral choice.  He advised against homosexuality, while embracing an arguably compassionate attitude. (I wish Dr. King were here -- Dan Savage could tell him how full of hate he was, and Rahm Emanuel could threaten to run him out of Chicago.)  He may well have known that his associate Bayard Rustin was homosexual, and I don't think that would have changed his regard for Rustin.

While Dr. King believed in social programs and redistribution, he also advocated a philosophy of color-blindness and personal responsibility which would be at odds with much of the Democratic Party philosophy today.  Dr. King wouldn't be eligible for the honor that was denied to Louie Giglio.

He'd be more at home in the Republican Party.  As ever he was.
Posted by Contrariwise at 12:05 AM