You know, either al Qaeda has put something in our drinking supply this year that is causing people (especially students) to go on shooting sprees, or the media is covering a lot more incidents.  Which do you think it is? 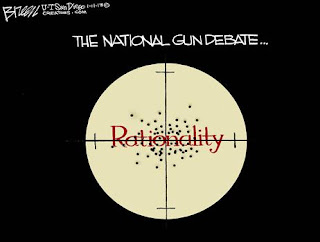 Another school shooting for this left-leaner to assert  how much smarter he is than the NRA.  This time few people died because the person was angry at a particular person rather than simply on a cold, deranged spree killing as many innocent bystanders as possible.

Get this:  Rather than being one of these deranged shooting sprees, this one was about retaliation.  Unlike the shooters at Aurora and Newtown, this one wasn't about harming as many people as possible. So they talked the shooter out of doing further harm.

Of course, talking's all they could do because the armed guard didn't show up that day.  (Could this kid have been waiting for a day the guard was likely to be snowed in?  Or was he counting on being able to put down his gun between the time he shot the person he came to kill and the time the guard arrived?)  Now, why couldn't the teachers at Newtown realize that you don't need a "good guy with a gun," you just needed to talk and listen?

Ummm. That blogger misses the point (and worked very hard to do so) that an armed guard only does good at a school if he actually shows up for duty.  If someone like the Newtown shooter had shown up while the guard had no back up, no one to stand in for him, this would have been another massacre.

Will either the loss of our liberty or the safety of our children "be the price" of not facing up to whether Big Pharma is doing more harm than good?  Notice how silent everyone is on that issue.  People clinging bitterly to their drugs.
Posted by Contrariwise at 8:27 AM