"I was working out in a local gym shortly after the elections when my trainer, a soft spoken black man in his 30’s, told me that he never dreamed he would see a black president in his lifetime. Other black men and women told me what this meant to them as parents: They could genuinely tell their kids that anything was possible in America. I was deeply moved to hear these things and took them to heart, encouraging my radio audience to pray that Barack Obama would be the greatest president in our nation’s history, which would have made for an incredible story."
~ Michael L. Brown, conservative radio host, 11/2/2012

"I remember three and a half years ago, when Mr. Obama won the election. And though I was not a big supporter, I was watching that night . . . I just thought, this was great. Everybody is crying, Oprah was crying. I was even crying."
~ Clint Eastwood, RNC Speech 2012

When Clint Eastwood spoke of crying, I thought back to that time.  Even though I had a strong premonition that Obama's term would play out much as it did, I was moved to tears by how clearly moved members of the black community appeared on tv.  I was moved by the depth of their emotions.  With their faces they told the same story that Michael Brown's trainer told him.  Even though I thought Barack Obama was a poor choice for America I was glad for what it meant to so many. 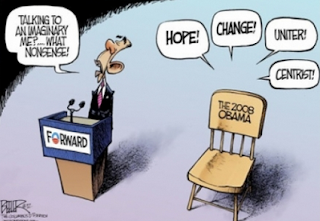 Even I was shocked later at the boldness of Newsweek to claim that there was no legitimate criticism of Obama since it simply had to be motivated by racism--it's white people ganging up on a black man. The criticisms couldn't be taken on their own merits.  Then there was the complicit dismissal of the Tea Party movement on presumed racist motives.  While all sorts of mayhem were being perpetrated at Occupy demonstrations, and racial slurs were being hurled by union activists, the media outlets focused on the alleged acts of unidentified racist bozos as somehow typifying the movement.  While Obama won by a larger margin in 2008 than any recent Democrat, it was presumed to not be about fiscal responsibility in the wake of the financial crisis--it was somehow all about Obama's "blackness" (and his foreign-sounding name).

Andrew Breitbart couldn't get anyone of the people with camera-phones and video-recorders to cough up evidence of the alleged N-word slurs at civil rights icon Rep. John Lewis.  If you watched Hating Breitbart, you would have seen that the much-trumped figure of an armed Tea Partier to go with the concern of armed white people camped out to protest a black President was actually a black Tea Party member, apparently neither frightening nor fear the other Tea Partiers.  The news people simply didn't show him above the neckline as that wouldn't fit their narrative of white people arming themselves in their xenophobic, lynching fervor.  It would have been non sequitur enough if there were some racist idiots that joined the movement and embarrassed them; it's worse that the whole incident was unsubstantiated.

I listened to an answering machine recording filled with messages by a hateful leftist mob, violent threats directed against a conservative non-profit group for being "Tea Party brownshirts."  I tried to find out what was considered so "brownshirt" about the Tea Party.  (Keep in mind that the Sturmabteilung was about terror, intimidation and violence.)  I finally found a site with the evidence.  There was a line of Tea Party protesters and a few were making fun of an old man that was sitting down in their space protesting their protest!  I think they should have behaved better but they weren't threatening him, and wern't seeking out people for intimidation. (Although some activists on the Left seem to do so without much hurrah.)  OWS Occupiers defecating on doorsteps bore more resemblance to "brownshirts."

Wikipedia reported that the Tea Party did not have a significant deviation in terms of race--though it did have a deviation in terms of gender.  It would be easier to argue prima facie that Tea Partiers were unfriendly to women (which would be a major theme for Democrats in ) than to blacks, though either argument would be pretty superficial.  Yet, even the Wikipedia article repeated the non-news that was ubiquitous that the Tea Party was "mostly white."  You mean, like the line I stood in at Target today?  Like my workplace?  Like America?  This irrelevant datum is a calculated distraction.

And TIME editor Richard Stengel calling the ultra-radical Salafis the Tea Party of Muslim democracy?  Well, all I have to say to that is: Joseph Goebbels was the Richard Shtengele of German journalism.

After the Republican National Convention showed so many faces of America, why did the perception linger that Republicans were only about electing pasty white males?  Could it be that the public was shown what would fit the popular "Republicans are racists" narrative? 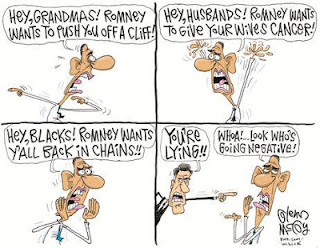 The marginalization of fiscal conservatives and social conservatives and traditional religious people (aside from Muslims, ironically) in media and pop culture has made me have much less of a sense of humor about the Left's hegemony in news and entertainment.  I believe that many well-meaning people are seduced by the superficially warm and caring positions of progressives, but as a movement progressivism has gone past the point of losing credibility and appeared as a virulent leviathan.  This is, of course, crazy wingnut talk to you if you happen to be "left of center," but if you are, hopefully you might still be able to acknowledge that the Left veered in 2012 from the usual political nastiness into the ugliest combination of demagoguery and ad hominum attacks that we've witnessed in some time. Hell, you might even have the decency to be embarrassed about it; unless you think that the ends always justify the means.

Obama's famous 2004 rebuke to "those who are preparing to divide us" (his DNC keynote address) seems like a cynical joke after this election year.  It was a nasty, nasty subterfuge.  Obama has demonstrated by his actions that he believed none of the words he was saying that night (unless his views on division have "evolved" since then), but was deliberately projecting the vices of the Democratic Party onto conservatives.

The base level of anti-conservative warfare has done as much as anything to make me realize how seriously unhinged America has become.  Liberal writers and reporters did more to awaken me to this anti-conservative intolerance than anything conservative commentators have said or done.  The Left made it so that the bias can't be ignored.
.
Posted by Contrariwise at 12:14 AM