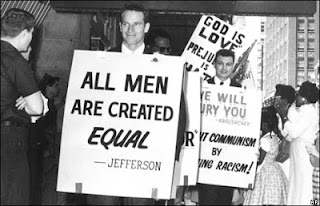 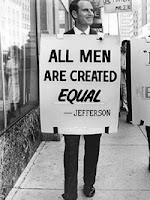 In the movie Bowling for Columbine, Michael Moore features an interview with Charlton Heston, and interview that seems climactic for Moore's argument that violence in America and America's enthusiasm for its 2nd Amendment rights are based in racism.  (Moore seems adept at "Critical Race Theory.") 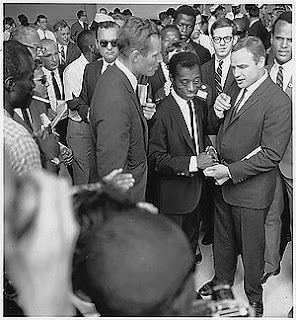 My #1 Question:  If you have seen this movie, what did you think Heston meant when he said, "We had enough problems with civil rights in the beginning."  Did you think that Heston was talking about the civil rights movement as a problem?  I know I did when I first saw the film.  I thought the interview made it seem that Heston keeps guns to make himself feel protected and safe from minorities.

Of course, this was before I learned that Charlton Heston was one of a small group of Hollywood players that really stepped to the forefront to advocate for civil rights in its true heyday in the 60s (watch video below).

Also, his role in the 1963 March on Washington.  Now, this is easily confirmed historical fact.  Was Michael Moore simply unaware of all this when he put his movie together?  Maybe this experienced documentarian just doesn't do his homework.  In the 23 minute interview with  Heston (which was pared down to 7 minutes for the movie) did Heston shed more light on what he meant about America's "mixed heritage" but was edited out?  Did Moore deliberately mislead  us about what Heston thought about race?

Read here for some other interesting facts about Heston's NRA speech featured in the film and some historical oddities about Moore's alleged racist history of the historically anti-Klan NRA, another pivotal part of Moore's gun-rights-are-racist argument.  Also, an interesting link between the NRA and anti-KKK defense.

Incidently, I'd like to thank Michael Moore for helping me realize more quickly just how little Progressivism has to offer and to help me reconnect with conservative thinking.  His blatent disregard for the truth and his utter reliance on non-fact to prove his point made a big impact on me at a critical time in my life.  Thank you, Michael Moore for being such an obvious propagandist.

Posted by Contrariwise at 2:08 AM