In the Hollywood scene, I wonder if you can see the uncanny resemblance between J.T. Walsh's son (left) and the first of Schwarzeneggar's love children (right): 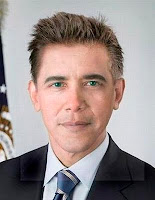 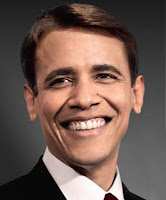 Actually, I'm not sure who the first person is, or whether or not it is a photoshopped picture.  The second picture is, of course, Barack Obama.  Does he look more Italian, Hispanic, Middle-Eastern..?  Even though the picture doesn't change much other than very superficial cues, the picture produces a very different effect.  And one can see a similarity to the first picture; the nose is probably the most meaningful difference between the two pictures.

By the way, who is that man on the right there?  Is he Arab or Jewish?  Perhaps he's Greek and I just asked you a trick question.  Perhaps it would further confuse you to learn that his name is Moshe al-Rashid D'Souza?  Really though, it's Jeremiah Wright, Obama's famed long-time pastor that intones damnation against America for all the oppression that he faces daily as a black man.  But realize that his politics are authentically black so he can not be accused of being only superficially black like this man is: 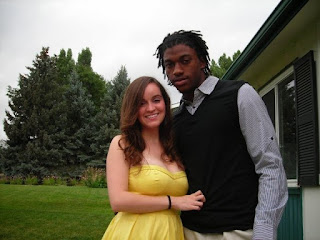 Yes, this man is currently being criticized for not being sufficiently/truly black.  You can see the problem. Look who he's with. Yes, he is getting criticism for this, and (SHOCKER!) the Left is not rallying to his defense.  Well, to compound matters further, he is rumored to be a Republican.  This is unconfirmed, but it seems to be based on the fact that Griffin wishes to be judged as a quarterback, not as a black quarterback. (My God, man, where's your pride?)

Ah, you guessed it:  I'm right-leaning and therefore obsessed with race.  Actually, even while growing up in a purportedly right-leaning region, I got a lot of messages from society (movies? news? what?) that were consistent with leftist thought.  Local racial humor didn't evoke nearly as much "color"-awareness as the following serious messages that reached me at a tender age:  (1) Black people were enslaved generations ago and they are very angry about this. (2) If they hurt you, the violence (and/or the anger underlying it) is understandable. Now who says that liberals don't believe in Original Sin!  They believe that some of us are born in sin.  Why I've been considered guilty of past life sins of slavery since the day I was born. (Similar gender-related messages filtered down to me at an early age but that will have to be the subject of a different post.)  A related message has since filtered down to me since my more formative years: (3) If you are white and being followed down an alley by a bunch of black men, it is racist for you to think that they might be about to hurt you for being a white oppressor.  You see, only silly, ignorant racists actually believe that all this justified anger might result in violence.

A problem with race "awareness":  So much reporting depends on whether someone is black or Hispanic or white.  (How could we visualize the Tea Party movement--or America--without being constantly reminded that it is predominantly white?)  But if the government were to make reparations for slavery, how would they recognize who to compensate?  How, for that matter, do they recognize who is eligible for special consideration as part of a minority? There are non-blacks that look black, and there are blacks that look white. Two apparently black people can have a child that doesn't look black.  Do they get special treatment but not their child?  Is anyone who can pass for black (but actually is not) eligible for special treatment?  Who gets to benefit from affirmative action policies?  What if you were raised by white people and are not culturally African American?

Of course, formalizing this (though it takes place informally anyway) makes being black seem like a syndrome rather than a "there or not" sort of diagnosis.  Can't we tell scientifically who is African American, or how African American someone is?  "Oh no!" you say.  Sounds like Nazism.  You're right.  We'll just have to depend on audio-visual heuristics for the legally necessary job of categorizing human beings.

Now, except for very few physical cues, it is probably not obvious that there is probably a lineage from African Americans in my family tree.  I am categorized (by whom???) as a white person.  And this informs the opinions of many an enlightened liberal about my motivations in the what I say or how I act toward an African American person.  But some noticeable traits have been passed down (and survived the generations) from an ancestor who married an Indian from a tribe known to adopt ex-slaves as members.  Personally, I think my father and his sister looked more like "people of color" than does Jeremiah Wright.

Would "reparations" be an all-or-nothing affair or will there be a sliding scale:  If you're a quarter black will you be partly eligible?  The way I hear it described, the less black one is, the fewer obstacles in one's path to success.  So it makes sense for reparations to be based on a sliding scale based on just how much of one's genetic heritage is really African American.  And *I* wish to be tested.  I want to know how much of the reparations I'm eligible for.   Maybe it will only be $200, but I still dig it.  Maybe I can't jump or dance but looking more ethnic than most white people has put me at a disadvantage most of my life, and I want some compensation.  I'm entitled to it.

Are there persons of color?  The definition of "color" by writers on minority studies seem to preclude "white" as a color.  I'm not sure if "color" is meaningful at all, but I find the exclusion dubious.  I bring this up partly because a Hispanic man once gave me a hard time about the use of the phrase "colored man."  "What color was he?" he said with a good-natured gotcha smile.  Is colored a racist term?  I'm not defending it as a particularly good turn of phrase but when did it become racist?  Whole courses in liberal identity politics studies use the term "color" in an ethnic/racial sense and I understand there is a whole National Association for the Advancement of so-called Colored People (meaning black people).  (Anyone actually know what NAACP stands for???)  But this absurd, surreal exchange has since led me to ask questions: What color am I? Why is my color unimportant?  Why does being classified (by the government? by liberals?) as white mean that I have no "color" (with whatever wonderful connotations "color" is meant to have)?

In a liberal academic world in which one can preach Afro-centrism while denying students a positive sense of  American politics and culture as a continuation of specifically European heritage (from Greco-Roman philosophy, Greco-Judaic religious tradition, British political philosophy, etc.), it seems some confusion prevails.  Confusions reigns to the point that Michael Moore visits an aging and progressively senile Charlton Heston, knowing that Heston is bound to repeat what he has often said about "the smart white men" that wrote our Constitution, and relying on the general public's ignorance that Heston was marched on Washington for civil rights (see video) before civil rights activism was popular with the Hollywood crowd or that Heston starred opposite a black leading lady (with an on-screen kiss) before that was common.  The philosophical difference between Heston and Moore is summed up nicely by the Peanuts parody cartoon above.  But Moore knew what to expect and edited the conversation such that our poorly educated college grads come away with a solid impression that Heston sits in his home, rifle testing in his cold, dead hands, afraid that uppity blacks will get inspired by civil rights.

This presents my mind with a tangential question:  Does Moore feel conflicted about having to constantly lie (for the greater good) to make a point that he surely believes would be supported by the facts, should he choose to depend on facts? or does he cynically indulge in "duper's delight" and love the fact that he can win an Academy Award for deception?   I personally think "duper's delight" would fit in well with Moore's apparent megalomania, but I really don't know.

In related news, Chris Matthews has admitted to descending into an almost conservative frame of mind for a full hour.  Wow! Unfortunately, this altered state was only temporary.

Posted by Contrariwise at 12:47 PM