The Gay Gene: The Politics of Cryptogenetics

I don't know when I'll have time to invest in a more lengthy treatment of the "gay gene"; there are many interesting aspects: correlation vs. causation, nature vs. nurture, description vs. prescription, etc.

The pervasive thought (in spite of a "massive" campaign to dose the masses with "critical thinking" education components is to confuse correlation with causation.  There are any number of correlations of moral, ethical, and emotional dimensions of human personality with biogenetic and hereditary factors.  Any sort of correlation of sexual behavior with genetics is taken as proof of genetic determinism.  The urban legend of the gay gene depends on a common acceptance of this fallacy.

Any reference to Orson Scott Card on this topic may or may  not mention that he has written sympathetic treatments of homosexual characters in his fiction or attended homosexual wedding ceremonies (only with the greatest sense of wonderment and irony), but it will certainly mention how Card pointed out the naturalistic fallacy of the "gay gene" thinking with the impolitic expression that a genetic predisposition to homosexuality is not just irrelevant but "almost laughably" so, since for most people, this allows them to imagine Card sitting on his front porch with a banjo having a good laugh at a homosexual's inner turmoil and suffering from harrassment, and all sense of the absurdity of the naturalistic fallacy is lost in the process.

This, of course, depends on folks having the same kneejerk reaction to words as in the case of reading all sorts of malevolence into the use of "legitimate" by Todd Akin.  Fortunately, there are all too many freethinkers out there who freely think using their limbic brain with involvement of the neo-cortex being optional, so it is great sport to make Card into an unfeeling fiend, so the loss of the sense of the statement is both welcome and hoped for. 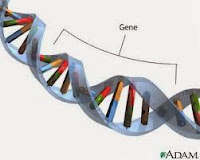 But maybe the most interesting aspect is the unwelcome fact that among identical twins, there is only a 50-50 chance that a homosexual's gay twin is also homosexual.  While it is unsurprising fro the standpoint that a predisposition should be that high, it is unacceptably low for those who dearly longed for a scientific justification for a forced social embrace of homosexuality (qua social liberalism), absurd an idea as such a justification may be.

With so many identical twins also sharing similar environmental nurturing, it is a shocking discrepancy.  There are a great many identical twins (though certainly not all) that actually look for ways to differentiate themselves and be unlike the other.  This, of course, is politically unacceptable as a factor in the development of sexual identity, since it is important.  If people are naturally homosexual, God must have wanted them to be that way; just as anyone who is naturally sociopathic must have been intended to be.  Of course, the same peddlers of the "legitimate rape" pseudo-scandal would dearly love to characterize this as a proposed equivalency of sociopathy and homosexuality, rather than address whether or not the naturalistic fallacy has been exposed.


. . . [I]t is possible to conclude that, given the difference in sexuality in so many sets of identical twins, sexual orientation cannot be attributed solely to genetic factors.  -Wikipedia

Nevertheless, the disparity among identical twins is, naturally, not taken by many to be evidence against the hypothetical "gay gene," but merely an opportunity for the creative storytelling powers of Darwinian fiction.  To support the hypothesis of the "gay gene," a new hypothesis has been formulated such that if one identical twin is gay, there is a hormonal suppression system at work in the amniotic fluid that stops the other twin from "getting the gay."  Apparently, gayness has so much raw adaptational value to the species that, rather than suppress homosexuality altogether, Natural Selection has invented a clever way to leave one gay and also leave the other free to perpetuate the genes.  Well played, Natural Selection. Well played. Very clever.

I'm not making this up.  This might seem like an unfortunately elaborate epicycle in any other science, but few sciences lend themselves so well to both politics and fiction as the flexible science of Darwinian speculation.  Immutability makes as good an explanation (much better in my opinion) of the pervasiveness of this particular naturalistic fallacy as any Darwinian story.

Gringas and Chen (2001) describe a number of mechanisms which can lead to differences between monozygotic twins, the most relevant here being chorionicity and amniocity..  -Wikipedia

"Gay" is good, so therefore it should be adaptive, therefore if there is some evidence against sexual orientation being genetically pre-determined, there must be a mechanism that acts to effect the discrepancy.  One might wonder at some counterpart to Todd Akin saying that if one of two twins is gay, the woman's body has a way of shutting it down so that both twins don't have "the gay."  Of course, some would claim that this a gross misinterpretation of the hypotheses -- that what researchers are in fact suggesting is that these "mechanisms" merely highlight that sexual orientation is simply highly sensitive to epigenetics and/or the chorionic and amniotic environments.

Realize here that there is much political mileage, both legal and polemic, to be gained out of classifying homosexuality as an immutable characteristic.  Which is one of the primary reasons that ex-gays are marginalized and denied by leftists and homosexual activists.  As long as it is a characteristic that is immutable after a baby leaves the womb, it still makes political, if not biological, sense.

Another interesting point is Richard Dawkins' contribution to the melee.  He can be seen on Youtube commenting that homosexuality is not necessarily adaptive, as the genes for gayness may have had a different effect when they evolved:

Dawkins here suggests another exaptational alternative to the other Darwinian speculations for the adaptational value of homosexuality.  He imagines that the genes that now make people desire the opposite sex at one time may have had a completely different, unrelated effect.

And lastly, it is interesting to note that there is evidence that whatever genetic factors predisposition one for homosexuality, they are different in men and women.  That is, genetic factors that make a male more likely to develop a sexual interest in the same sex (in our modern environment and modern physiology--as we may qualify it according to Dawkins) are in general different from those factors that are similarly at work in women.

Post-script:  One new avant-garde hypothesis postulates that many so-called genetic human conditions could have pathogenic factors, including same-sex attraction. While Ewald and Cochran warn that this does not necessarily make a condition a disease, Cochran opines, “Should we drop a theory that has a chance of being correct on the grounds that it might upset people?”  Interesting question.  Let's take a vote among the Sociology faculty and see what the response is.

Posted by Contrariwise at 6:05 PM