What kind of person is Hillary Rodham?  Curiously, the Wiki article on her lists her as getting caught up in the "Civil Rights Movement" and then the link for that Movement lists 1968 as its end.  Hillary got on that bandwagon after 1968.  Is this equivocation?  Was the militant Black Power movement embraced by Leonard Bernstein and radical chic rich liberals, the same movement--or even the same fight--as Dr. King's movement?

I find it interesting that Hillary Rodham changed her mindset completely at school under the tutelage of university professors.  Nixon, whose statist tendencies are often maligned, used the power of the federal goverment to further the impact of the Civil Rights Act and to advance de-segregation, yet the what wonders why Progressives weren't new to the Democratic Party.  They were allied with the Democratic Party before the supposed "sea change" and afterward.  The support for the Civil Rights Act was mostly from the GOP, JFK was a johnny-come-lately to supporting it, and Nixon, who is now hailed by the Left as a typical conservative when it comes to anything negative, gets no credit for his not-atypical Republican support for Dr. King's conception of civil rights.


So what swayed Hillary from her conservative convictions in the face of a strong and proud tradition of equal protection conservatism toward an embrace of unequal protection liberalism as a supposed reaction to Nixonian Republicans?  How large a role did her academic authorities play in her conversion?  Conversely, was it not from a change of heart but rather out of a sense of ambition that she gravitated to liberalism, sensing more opportunity in merging of anti-Nixon cynicism with the reinvention of Progressivism as expanding the power federal authority to protect individual rights. (A curious coupling, no?)

This former Young Republican and Goldwater girl went from being a "mind conservative and heart liberal" to identifying in 2008 with Progressivism, that strain of collectivism that was closely tied to eugenics, praised fascism and communism, engineered the income tax and a massive tax collection agency with enormous power, and worshiped the powers of administrative bureaucracy.   Yes, in 2008, Hillary rejected the moniker of "Liberal, which from the time of 1968 onward has been Progressivism with a libertarian face, neatly dispensing with any pretense to the superficial libertarianism of the Left.

In the 1960s, Lyndon Johnson facilitated the hijacking of "Civil Rights," to which his party had hitherto objected, to mean FDR's reinvention of "rights" in his Second Bill of Rights, and exemplified the cynicism of the move with a particularly offensive expletive.

Is this promising expansion of power what drew Hillary to liberalism?  Her story, naturally, is one of a studious woman who traded a failed idealism for a worthy idealism.  Did the unethical behavior that got her kicked off the Watergate Commission come out of her unfettered idealism?  She was so incensed at unethical behavior in Washington she decided all bets were off?  Or was this another expression of ambition, riding Nixon's political corpse into the limelight?  And when this bid for power failed, the gravitation toward up-and-coming (no pun intended) Bill Clinton, groomed and mentored by an older generation of racist Democrats, a man whose career got her Hillarycare and paved the way to her later lackluster, scandal-ridden diplomacy career. 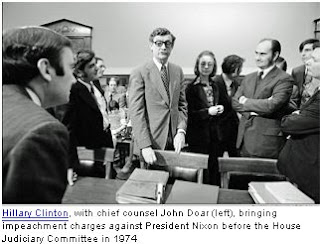 Between the Hillarycare failure and the Benghazi debacle, there was the necessity of "proving" herself with federal office.  To win the bid for Congress she had to get Curly Bill to pardon terrorists and she had to lie to American Jewry that she was not partial to the Palestinian cause and really considered Jerusalem to be the "eternal and indivisible" capitol of Israel.  (Her views re-evolved back to Pan-Arabism as assuredly as Barry Obama's views did back to his original LGBT Progressivism).  But what is a little corruption in the grand scheme of saving America with an all-powerful leftist Nation-State?  There is no real consolidation of power without deception and fraud, as the recent Lincoln movie preaches openly.

What I wonder is, was her ideological switch a heartfelt ideological conversion or a pragmatic political makeover?

Posted by Contrariwise at 7:54 PM