Ever since Todd Akin's remarks were used to rally the abortion-friendly Left to resurge against the advancing public opinion against abortion, the subject of rape came into the limelight.  Many social conservatives were left wondering why the matter of how the unborn differ from the born became less important than how they got there (and therefore, why they receive capital punishment for another's crime), and Republicans in general were wondering why rape was being discussed when the party has always allowed the rape exception.

Being inundated for weeks last year by unthinking opinions on the matter, I have taken issue with many aspects of these national "dialogues," not least of which is the Left's sneering at the word "forcible."
Eric Holder, lover of all things progressive and corrupt, in addition to his already fine resume of corruption and ideologically-driven justice (guns, voting, abortion, transgender, etc.) has enlarged to scope of rape to include the gray areas of date rape, because rape is rape.

Take Amelia McDonnel-Perry's horror story of rape.  It has many explicit details about the encounter that I won't repeat here.  She notes that her experience was "by definition" a date rape.  After she finally decides to lose her virginity to her virile boyfriend, it comes out that she actually lost it two nights before to him.  Because she lost her virginity two nights before she thought she did, she breaks up with her rapist... a few weeks later.  It wasn't, she avers, because of his offensive politics or because his job was not nearly as impressive as she believed when she wanted to go all the way with him.  No, it's because hanging out with your rapist gets to be a drag after a couple of weeks.

Now, you might be wondering, if the whole point was to take advantage of a drunk woman who didn't know what was going on, why this guy let the cat out of the bag by incredulously saying, "But we had sex two nights ago!"  Clearly, this guy flunked out of scumbag school.  He obviously got away with it, and he confesses to his heinous crime.  Unless he was genuinely confused--something it has taken McDonnell-Perry several years and many therapy sessions to accept.
The details of the crime are too graphic to mention here.  But we are told that this happened at the end of a night of drinking, and that she was aware enough to know that her boyfriend was putting some part of himself inside her, but she was confused about what it was because she had gotten so wasted.   She admits she may have confused him with her moans of pleasure.  She says that even though the episode made her reexamine the role of drinking in her sex life, she knows better than to accept any responsibility for what happened.  After all, rape is rape, and by definition only the criminal is responsible.

Here's what I find especially odd:  If I get drunk, even though my judgment may be shot and suddenly driving seems like a good idea, I am still held responsible for my actions even though I would be mentally incapacitated (in the DoJ rape terminology).  Her date drank: his confusion makes him a rapist; she drank: her confusion makes her a victim.  Maybe, just maybe, "don't drink and jump into bed" is as good advice as "don't drink and drive."


Men will have to start considering themselves raped whenever they regret sex after drinking. Goose/gander and all that. Eg: "Your Honour, if I hadn't been 3 sheets to the wind on all that beer, I'd have never had sex with such a woman as creepy/ugly/crazy/whatever as her. She took advantage of me, therefore Rape! Rape! Help me, Your Honour!"

No kidding.  And think about what happens when the man pays for years because of the "rape pregnancy."     I once read a complaint by a man who says he was being sued for child support by a woman who he felt had mickeyed his drink as he would never have consciously had intercourse with her.  Most people (especially women) would read this and dismiss it.  He's a guy--he must have wanted to, he must have enjoyed it as well.

Let's say two homosexual men go to a room after a night of drinking and some rape occurs in the DOJ definition even though in the moment both seem to be having a good time.  Later, one is mad at the other because he clearly did not ok that kind of sexual activity two nights previous.  Let's say he is even more confused because he thought his rapist wanted to take things slow as well.  (Okay, many will say that is impossible in the world of gay men, but aren't men and women all the same?)  Like McDonnell-Perry, the victim did not give "enthusiastic consent" that he had changed his mind about this idea.  He finds out that this activity had happened two nights before he was ready for it to happen.  His rapist then says, "You also did it to me that night and I was as drunk as you were!"  Oops.  Now they are both rapists.  Maybe they can turn each other in to Eric Holder.  Or maybe they can agree to keep silence, never to tell the world the horror of their crimes they have inflicted on each other.  Maybe they'll date each other a few more weeks until they can't stand to look at each other any more.

In the wake of the Todd Akin rape-is-rape tsunami, the following PSA was accused of "blaming the victim":

02:19 a.m  SHE DIDN’T WANT TO DO IT, BUT SHE COULDN’T SAY NO.
When your friends drink, they can end up making bad decisions. Like going home with someone they don’t know very well.
Decisions like that leave them vulnerable to dangers like date rape. Help your friends stay in control and stay safe.

This reminds me of the 3rd Rock From The Sun episode where Dick Solomon exclaims after being robbed at an ATM, "What kind of world is this where you can't wave handfuls of money around in the middle of the night?!"  The ad is encouraging people to watch out for their friends to keep them out of bad situations.  But never mind.  Don't look out for your friends.  Because if anything happens it was somebody else's crime and therefore there was nothing you could do about it.  But you do have an obligation keep your friends from drinking and driving.

The 'fallacy of shoulds' argument to not avoid bad situations because you shouldn't have to feel unsafe just ignores the reality.  Arguing that because there shouldn't be these dangers you shouldn't have to try to avoid them is ludicrous.  I should be able to leave my keys in my car and not have it stolen, but that's not reality.  I should be able to leave my bank account information lying around my desk at work, but that's not the world I live in.  It wouldn't make me responsible for the crimes, but it would make me negligent.  Part of being a responsible person is responding to the world in a realistic way and not sticking your head in the sand.

Back to Mr. I Couldn't Help Myself.  He's genuinely surprised at McDonnell-Perry's reaction that she doesn't remember losing her virginity two nights earlier.  He gets defensive when she gets mad at him because rather than having given herself that day to Mr. Fish Tank Salesman, the boat had sailed earlier that week instead, when they were both drunk and both ecstatic and enjoying themselves.

She says "I think that if I had stopped him . . . he wouldn’t have forced me"  She thinks. Well, that might at least explain why she dated him another couple of weeks.  But social progressives preached for weeks last year that "forcible" and "force" is an irrelevant concept in distinguishing kinds of rape or determining consensuality in any way.  Rape is rape.  Wasn't the whole point of that tautology to dismiss the idea that there is anything circumstantial to distinguish about rape?  Maybe there are consent-fuzzy situations. But no. Rape apparently occurs whenever consent is not verbal enough or enthusiastic enough  — in all "consent-poor" situations, if you will.

And thus she writes reflecting on the man having total blame for what happened that night, "This is not at all to say that I blame myself even one iota for what happened."  Not one iota.  How was she to know that having sex with a drunk man while drunk, in a dark room, with a history of feeling numb when drunk, with parts of his body being inserted with her enthusiastic consent, that something might happen?  I mean, she had the talk with the guy when he was sober.  Not one iota.  I mean, it's not like people drink because it lowers their inhibitions...

What if the misunderstanding had occurred two hours earlier instead of two nights earlier?  Would she have maybe stayed with him a few more weeks?  "Seriously, babe, you lost your virginity two hours ago?  Don't you remember?"  "What!!!! I told you I wasn't ready, you jerk!"

Does she wish she had sent him to prison?  Does she wish she still could even though she doesn't believe he was being malicious?  I mean, rape is rape. (Unless it's Polanski rape.)  I mean, isn't the whole purpose of rape laws so we can send men to prison where they can really learn how rape is performed?   I mean, that is rape "by definition."  Why else (re)define it? 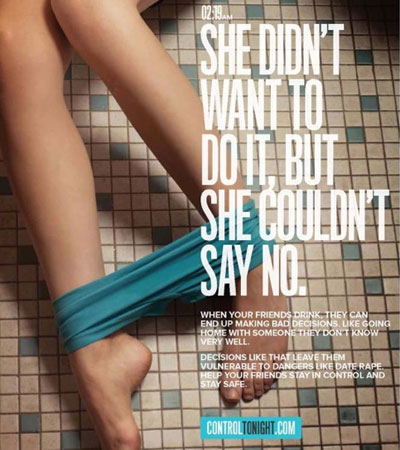 Posted by Contrariwise at 12:31 AM