Supreme Court -- The Supreme Joke At Our Expense 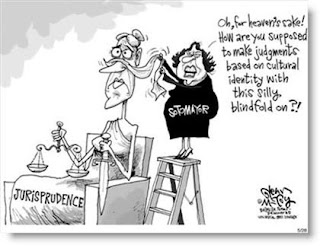 The new Obama packed Supreme Court is having a lot of laughs on us.  Obama gave us Kagan, who thought having Bork cross-examined on his ideology was great even though she herself was spared the indignity, and Sotomayor, a judge who was uniquely qualified by her "wise Latina" credentials.  Obama chose them, not for their ability to think critically about the bounds of federal interference nor for their ability to exercise judicial restraint (that thing Obama seemed to care SO MUCH about in the Citizens United case--and ONLY in that case) but for their empathy.  You see, they were uniquely qualified to decide cases sympathetically, not based on law, but on their feelings about the downtrodden.  You see, our "Constitutional law professor" President did not see this as a recipe for undermining our constitutional republic, but as necessary means of enshrining his liberal values in judge-made laws purporting to divine the mysteries of the "spirit" of our highest laws. 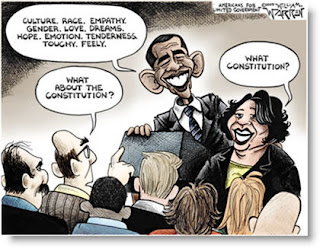 The same Court that, faced with a choice between sending Obamacare back to the drawing board or exposing the fraud, "saved the Court" (yes, Huffpost invented a solution and a crisis all in one headline, 'cause the Court has never made an unpopular decision before; who knows what people would do with something as beloved as Obamacare) by creating a legal fiction about the penalty on people were so poor they didn't have insurance.  After weeks of scolding the defenders of Obamacare about speaking out of both sides of their mouths about the penalty/tax/penalty tax, they found a way of preserving the 1200+ page pork-laden, lobbyist-written, superlegislature-creating, IRS bureaucracy-mushrooming liberal attempt to make America choose between skyrocketing taxes and insolvency.  All they had to do was get in on the fraud that was being perpetrated on America, and say, "So you Americans fell for the 'This is not a tax' line; we can't help if you're stupid."  And they went home and had some yucks with their friends about how gullible the people of this country are, while the fiction machine churned out articles about how our political process was saved by this nimble and ingenious bit of sophistry.  Liberals found an excuse to argue for judicial restraint (looking at it that way, you could think of it as a tax ...). 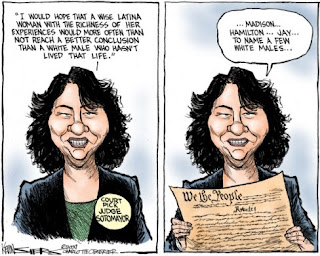 Just like the Affordable Care Act (a.k.a Obamacare) needed to be passed so that you could find out what's in it ("we're going to show it on C-SPAN"), Kagan had to be placed on the Supreme Court before you could find out that she was just another dyed-in-the-wool, America-is-just-another-country-only-worse liberal.  I mean, we didn't hear anything specific about her (just like Ginsberg), because she's not Robert Bork.  Well, now you know.  If you're a liberal, you're probably happy that the backward people of this nation are being duped out of being able to transmit their backward values to the next generation.  It's the liberal version of taqiyya.  It's a triumphant power play. 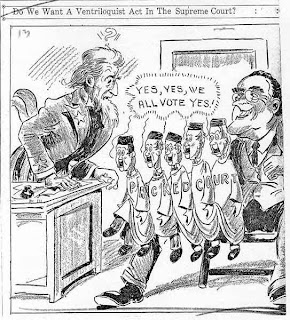 Speaking of a large rat's nest of a law, I bet you can't wait to find out what's in the new 1000+ page amnesty legislation with its vague gestures about building a few more feet of fence in the desert.  Will liberals act surprised when there is no more border control 10 years from now, or will they be laughing in our faces that we "fell for it again"?

Since liberals started making judicial laws based on their own values and making up all sorts of sketchy rationales for it, they've had to parry the charges of judicial activism by claiming that judicial activism is whenever a decision is found in favor of something that isn't approved of.  Don't like corporations?  Well then, a decision found in favor of corporations is called judicial activism.  But judicial activism is really making up your own interpretation because you don't like what the outcome of the case would be otherwise.  Judicial restraint, on the other hand, is deciding based on the laws of the land and adjudicating between laws based on the rules (not the feeling or the spirit) set forth by the elected lawmakers of the country (along with common sense and precedent) in accordance with the legal protections of the Constitution that constitutes federal authority.

Judicial restraint, not empathy, should be the overarching value of a Supreme Court justice, because that is how our republic is protected from despotism -- how the rule of law and constitutional authority is preserved -- not by our judges becoming benevolent despots because they believe they are wiser and more moral than the rest of us.

Posted by Contrariwise at 1:25 PM