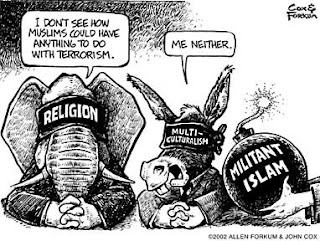 Here's a thought that freethinking leftleaners can denounce as xenophobic hate speech without actually thinking about:

What if we took all the people that we caught sneaking across our southern border and deported them to Palestine?  These are already desperate people who are willing to leave their homeland to find opportunity in the desert wilderness.  We would find out just how much more open and non-racist the Pan-Arabist insurrectionists, I mean Palestinians, are compared to Israelis.  We would see how they accommodate demographics changes as the Palestinian population shows a growing number of Hispanic Palestinians.

What's that you say?  There would be violence against Catholic Hispanics?  But I'm assured that Islam is a religion of peace and the only violence coming from the Palestinians is an assertion of their rights as citizens just like our Revolutionary War, so that is not a valid objection.

There's a good chance that the growing Hispanic block would side with the more moderate Arab Palestinians and vote out Hamas in favor of a government that would deal more reasonably with Israel.

You say that the Palestinians would drive their Hispanic citizens into the sea?  I remind you that you are talking about peace-loving Arabs who only bomb Israeli civilians in order to be heard.  I don't appreciate your hate speech.  I'm going to report you.

Posted by Contrariwise at 7:25 AM