“Russia is a regional power that is threatening some of its immediate neighbors not out of strength, but out of weakness.”

Remember when Obama said to Romney about Russia:  "The 1980s are now calling to ask for their foreign policy back."  Maybe it’s time to call the 1980s to ask for our old foreign policy back.  The one we have now is truly awful.  It's Obysmal in fact. What does Obama have to say about Russia now?  This flexing of power against their neighbors is, in his opinion, a sign of their diminishing power, a sign of weakness. Wow. When this guy shovels it, he uses both hands.

Now, Russia and Iran have a new competitor for total foreign policy poochscr&w:  Just how catastrophic can progressive foreign policy get in the Middle East?  Well, Clinton bailed before she could find out the answer to that question, so enter 'Boston Strangler' Kerry.  Kerry and the President have said that Israel should be doing more to prevent Palestinian casualties, but haven't done us the service of saying what that is or why they think this. 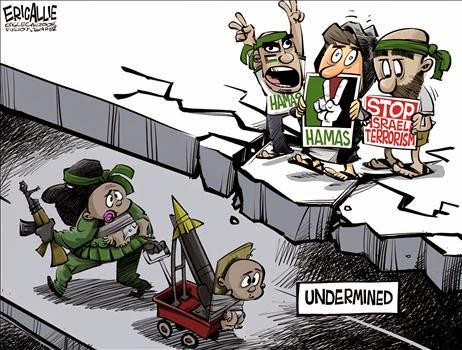 Meanwhile various commentators are saying that fairness dictates comparing Palestinian deaths to Israeli deaths, not comparing attempts to kill and hostile aggressions.  Apparently one is supposed to not remove the threat unless the terrorist attack succeeds, (just like one is only supposed to defend oneself if actually hit by a bullet). Sheik 'Yer Mami has a cogent answer to this biased assertion.

As almost the whole Arab world is shrinking back from the stink of Hamas, Nancy Pelosi seems willing to take the Qataris' word that Hamas is a humanitarian organization (maybe the Qataris are getting rich off of the deals that procure expensive weaponry for Hamas? Poor Nancy), while Holocaust survivor Elie Wiesel is calling out Hamas for its tactics that are responsible for the high civilian casualties.

In my own lifetime, I have seen Jewish children thrown into the fire. And now I have seen Muslim children used as human shields, in both cases, by worshippers of death cults indistinguishable from that of the Molochites. [emphasis mine]

But what of this constant need to paint as victims (and certainly many Palestinians have been unwilling victims of Hamas and militants, as the recent murder of protesting Palestinians by Hamas has demonstrated) the Syrian Pan-Arabist Muslims of the former British Mandate of Palestine (the Israelite territory passed from empire to empire till the 1940s) that we now call Palestinians?

The recent open letter in which Spanish celebrities have stated that the high civilian casualties are not due to Hamas' use of civilian hostages but rather due to Israel's commitment to genocide (which is laughable if you know anything about Hamas' charter or the Nazi propaganda used by Palestinian Arabs from the 1940s up to now) has recently stood out as the paragon of anti-Semitic victim politics. Ben Shapiro (who has already chastised his UCLA alumni for this foolishness) discussed this on Dennis Prager's radio show today [bold emphasis mine].


Prager: Well, I have a problem, interestingly, with calling them [Javier Bardem and Penelope Cruz] anti-Semites because it enables them to evade the evil that they committed [with the blood libel of “genocide”]. I don’t think they wake up every day thinking “How can we hurt Jews?” [But t]hey lied in the most horrific way about what Israel is doing.  If they don’t retract the charge [of genocide], I don’t care if every day they kiss a Jew, so it’s irrelevant to me what they feel about Jews. They did a horrible thing to Israel.

Shapiro: “But here’s the problem: Without labeling them as such they don’t respond. So if you just say, “What you said is anti-Israel and it’s a lie,” that draws no response because these people work in the world of emotion. So if you label them anti-Semitic, which is what their actions are, then they are driven to try and disown themselves. This is, unfortunately, this is why the Left is so effective, cause what Left does is they always go to intent. Right? They don’t like our policies, so it turns into “Well, you’re racist” or “you’re sexist” or “you’re bigoted” or you’re homophobic,” that’s very successful with the world. And I think that conservatives in general – we have a choice we can argue with the world as it’s currently constituted or we can deal with the world as it is. Dealing with the world as it is, if we … just say, “They are liars and they’re siding with evil,” they won’t care. [But i]f we say “Your intent is to hurt Jews,” which may or may not be true but is certainly true in terms of effect, then for some reason that has resonance with folks. It’s a sad world that we live in where intent matters more than action [i.e. effect], but that’s sort of where we’ve reached. . . . Dennis, I also think there’re two types of anti-Semitism. There’s the Muslim-in-the-Middle-East anti-Semitism: “All Jews are bad; I wake up in the morning trying to think how to hurt Jews” – and then there’s the enabling anti-Semitism of the Left which is basically based in anti-Westernism, which is “Anything Western is bad, and Israel is a repository of imperialism in the Middle East, and therefore it justifies what the Muslims are doing in the Middle East to Israel.” And that, it’s hard for me not to label that at least an attendant anti-Semitism.

Prager: “No, no, look, if you isolate one state of the 220-odd states in the world – that, that is the only state being targeted for annihilation, then it’s a little naïve and disingenuous to say, “Oh, I love Jews but if the Jewish state is isolated [i.e. singled out] for destruction and for libels, I’m okay with it. I want to go back to this though, I want to make this clear for my listeners: They [Cruz and Bardem] did not retract what they said [that Israel is guilty of genocide].” So it’s nonsense what they [later] said [about having nothing against Jews or Israelis]. It’s meaningless.”

Post Script:  Are John Kerry and Javier Bardem extremists?  It depends on what you mean.  Relatively speaking, since radicalism has completely dominated the Democratic party, it is not fringe or atypical at all.  It is in this environment that Democrats will say that the Tea Party's views are extremist, partly because many don't know what they are celebrating on July 4th and because many vehemently hate what we are celebrating on July 4th.  Kerry and Bardem and Obama represent an aggregate of radical philosophies that have become all too popular since the totalitarianism started pretending to be libertarianism in the 1960s..
Posted by Contrariwise at 12:52 PM