My Job Is More Important Than Your Job 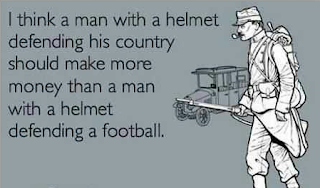 Not just football players but basketball players.  And limits on what actors can make per movie deal.  Are movie and tv actors more important than soldiers?

Or maybe the constant recourse to "importance" is flawed.  In a free society, where people are perfectly free to exchange their wealth for services they care about, does the most important job get paid the most.  Is garbage duty not important?  Who do you think you are thinking you deserve something better than garbage duty simply because you studied for years to get skills that few people have?

Yes, I think we should do a lot for soldiers, particularly those who serve in highly dangerous tours of duty.  However, we can't afford to pay most soldiers, except maybe the exceptionally skilled, the same as the highest paid football players.  That's a competitive sport, and a select few get the dough.  So if you want to follow the progressive program to take over the free market in order to make the world more fair, you'll need to limit football players' salaries.

Like I said though, I think the Hollywood bigshots should feel the pinch as well.  It's all well and good to be an armchair Marxist like Bill Maher.  Put your money where your mouth is, Hollywood limousine liberals.  Stop filming in Canada and Florida to avoid the high California taxes.  Work for less money.  Have fewer mansions and estates.  'Cause you're not more important than a teacher either.
Posted by Darth Thotz at 10:40 PM