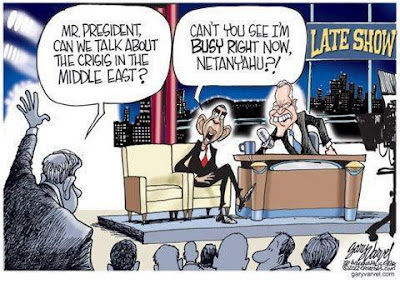 Sure, our economy has stayed in the toilet and even the magic words from the administration celebrating the upturn hasn't actually created a significant upturn. (Wow!)

But "fixing the mess" that is supposedly due to conservative politics, was just one of 300+ items on Obama's agenda.

So it's important to remember that Obama was mostly hired because his name and face would cause every knee to bow and every tongue confess across the world.  (The Europe Union swooned and genuflected.)  He was going to transform foreign policy with identity politics.  After all, he wasn't entirely raised as an American.

Who could have predicted that we were heading back to the days of Carter?

Enter Romney.  Romney and foreign policy?  Well, our unbiased media buzzed with British tweets about "Mitt the twit" after he dared to comment on their Olympics debacle as a former organizer of the Olympics.  Why if Mitt were elected, he might give the Queen of England an iPod with the best of Mitt's speeches.  Wait, sorry, I'm confused... that already happened, but it was Obama(!) that already did that.  Remember that story going viral?  No?

If you had, certainly Obama's jab about Mitt insulting "our closest ally" might have been seen a little self-righteous.  Of course, if you'd known that Obama's state department had added insult to injury for rebuffed British ambassadors by saying "There’s nothing special about Britain. You’re just the same as the other 190 countries in the world," Obama's jab might have even sounded phony.  Surely, Britain might be confused by this statement after Obama proclaimed we had no more strong ally than France. (You can't make this stuff up.) Wait, did Mitt insult the French?  Now I'm confused.

To add more confusion, Obama told Jewish donors (according to ABC) that there is no more important ally than Israel.  This might be news to Israel, who, outside of Obama's Convention speech, have been getting the message that they are a problem.  But then the positions taken by the State Department probably seem strange since Hillary used to loudly proclaim to her NYC constituents that Jerusalem was the "eternal and indivisible" capital of Israel.

Perhaps this all makes sense if there is no ally more strong  or important than "the other 190 countries in the world."  Obama has certainly shared more conspiratorial winks with Putin than with Netanyahu.  Not that long ago, Israel was described by Obama as "one of our closest allies in the region." Wow.  Israel is moving up in the world.  Getting as close to us as Libya, Egypt (who are less allied with us than ever), Turkey, Lebanon, Afghanistan...

In. The. Region.  You heard right.

Of course, as damning as it would have been if committed by a conservative, Obama's gaffe with the Queen's iPod doesn't even make the British top ten insults from Obama. But Mitt's the dangerous one because he bruised the British ego by agreeing with their own journalists that there was a disconcerting amount of chaos with regard to the Olympics.  By comparison, making little snide comments with Sarkozy about what a liar Netanyahu is, doesn't seem like such a big political misstep, does it?   Obama has all the grace of a bull in a china shop.

Now, the conventional wisdom over the last 30 years has been than our two closest allies are Israel and Britain.  Strongest, closest, most important allies.  Obama, however, doesn't seem to see anything special about them, and has had to slowly, grudgingly, upgrade their status just to not look like a total clown.  Too little too late, I think.

But you watch CNN, so you know what a foreign policy genius Obama is. They say so.

Incidentally, I was thinking yesterday about how I remember "potatos" and "potatoes" being alternate plurals at one time, and I wondered how hilarious it would have been if Dan Quayle had followed up his "potatoe" brain fart with pronouncing "corps" as "corpse."  Wow, we could have really slapped our knees (and the media certainly would have) over what an idiot this guy was... Only that was Obama that made this mistake.  We should excuse him though because he very probably never had a friend that served in the Marine corpse.


Posted by Contrariwise at 9:34 PM