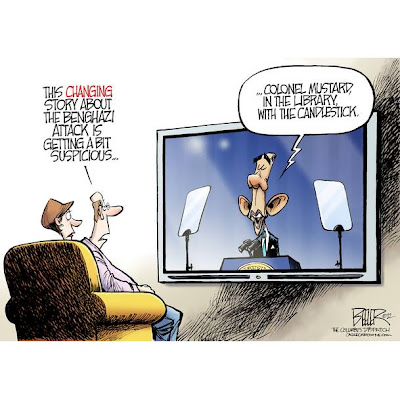 An interesting thing happened in response to the Benghazi debacle.  For weeks afterward, people had the impression that it happened because of a mob that got out of control.   A couple of Muslims gathered around an iPad and were horrified at the ill treatment of their holy Prophet, and got together their pitchforks and torches to storm the castle.  Meanwhile, Achmed broke out his stockpile of assault weapons, and Abdul finally found a use for those 150 hand grenades he had been saving for a suicide bombing.


[UN Ambassador Susan] Rice’s account directly contradicts that of Libyan President Mohamed Yousef El-Magariaf, who said this weekend that he had “no doubt” the attack was pre-planned by individuals from outside Libya.  “It was planned, definitely, it was planned by foreigners, by people who entered the country a few months ago, and they were planning this criminal act since their arrival,” Magariaf told CBS News.* [emphasis mine] 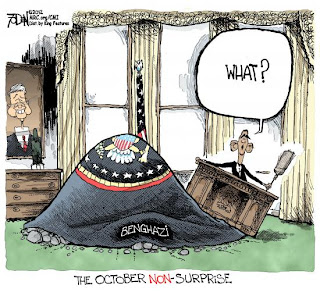 What an inefficient State Department to take weeks to figure out that unlike the Cairo event (which didn't result in American deaths) there was no corresponding demonstration.  The administration avoided saying for a long time that it was a terrorist attack because of a supposed ongoing investigation. The Susan Rice narrative instead played out in people's imagination.

How is it that instead of talking about terrorists invading American soil, the administration got everyone talking about a riot that started over a videotape?  If it was acknowledged from the beginning that it was a concerted effort of terrorists, how did the idea take over that it was an angry mob that got out of control?

Could it be because Obama equivocated in his Rose Garden speech that "No acts of terror will ever shake the resolve of this great nation"? That sounds like a warning. It follows a discussion of the events of 9/11/2001 and is general.  The Benghazi events are referred to as "outrageous attack," "brutal acts," and "terrible act." but "acts [plural] of terror" is reserved for America's position on terror (the Obama Doctrine?).

The State Department has said that it never believed the September 11th attack on the U.S. consulate in Benghazi was the result of a protest over an anti-Islam movie - directly contracting the rest of the Obama administration. [emphasis mine]


Candy Crowley appeared on The View the day following the debate and complained that no one remembers that she was actually saying that Romney was right about Obama's evasion about terrorism.  She says that she was only conceding a minor point about terminology. 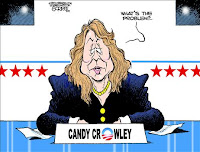 Perhaps, Ms. Crowley, people only remember your minor "fact check" because Obama spiked the ball over the net (impression-wise) after you set it up for him (and he seemed like he was expecting it to happen), and then Mrs. Obama started the round of applause, and then you quickly changed the subject after equivocating on Romney's point.  Game, set and match, ref.  Equivocation, I say,  because you said the opposite of what you apparently intended.  You said that it took weeks for it to come out about the riot and the tape, but it took weeks for a different story to replace the interim fiction about the non-existent demonstration.  So ... image managed.  Many people got the Orwellian impression that a successful terrorist raid on our embassy had been the story all along.


Witnesses tell CBS News that there was never an anti-American protest outside of the consulate. Instead they say it came under planned attack. That is in direct contradiction to the administration’s account.”  — Margaret Brennan CBS News correspondent, CBS News report aired Sept. 20

What we do know is that the natural protests that arose because of the outrage over the video were used as an excuse by extremists [emphasis added] to see if they can also directly harm U.S. interests.” — President Obama, Univision Town Hall, Sept. 20 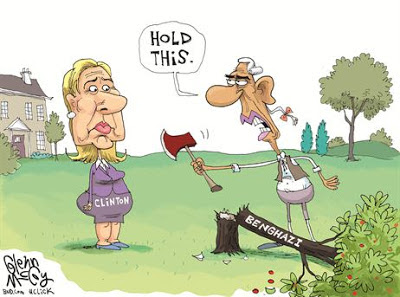 Posted by Contrariwise at 9:43 AM