Revisiting Honesty Over Acts of Terror

In the 2nd Presidential Debate of 2012, Candy Crowley after wrongly reinforcing Obama's misleading phrase where he vaguely spoke of unspecified "acts of terror" as the White House misinformed the public for weeks about a demonstration over a video, tried to appear even-handed by,  but Democrats were still whopping it up over Crowley's wrong statement that he called it an "act of terror."  If he had really called it an act of terror, then the White House could not have been coy with the press and evaded calling it a terrorist attack for weeks.  But who could see the inconsistency as Democrats were loudly high-fiving over another successful publicity stunt?

Too bad we didn't have access to this information in October about what General Petraeus had foudn fishy about the edited CIA talking points:


The original CIA talking points had been blunt: The assault on U.S. facilities in Benghazi was a terrorist attack conducted by a large group of Islamic extremists, including some with ties to al Qaeda.
These were strong claims. The CIA usually qualifies its assessments, providing policymakers a sense of whether the conclusions of its analysis are offered with “high confidence,” “moderate confidence,” or “low confidence.” That first draft signaled confidence, even certainty: “We do know that Islamic extremists with ties to al Qaeda participated in the attack.”

Al Qaeda just happened by with rockets and assault weapons on September 11th when they noticed people demonstrating over a video and decided to join in?  Hmmm... No, we better just not ever mention al Qaeda at all. Blame it on a video, Susan Rice.  And after we tell America, we'll find the person responsible, we'll jail the guy who made the video.

Jill Kelley became an advocate for internet privacy after the private information from her personal email were leaked once the FBI had searched them.  Why did the FBI leak the information, unless Eric Holder wanted to create a different sort of scandal for the people to associate with Petraeus?  How many months before the Benghazi incident was the Petraeus affair being investigated?

Also in the 2nd Debate, Obama tells us that as he's watching the terrorists go after the two surviving men in the embassy, he'll avenge them (or at least find the perpetrators).  He's watching all this happen live and he admits to already having written them off and doesn't explain why. 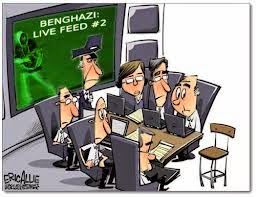 Posted by Contrariwise at 10:27 PM